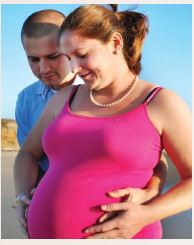 Before trying to start a family, get your gums checked. When you make the decision to start a family, you receive a lot of advice from doctors, friends, family and other well-wishers who have been through the process: eliminate exposure to cigarette smoke and alcohol, eat a healthier diet, exercise in moderation, take supplements, etc. But the one bit of advice you might not get is to have your dental condition checked, too. In fact, the ideal time to make sure you are dentally healthy is well before you conceive.

For couples who are already pregnant, a periodontal exam is especially in order; it’s critical. Additionally, periodontal disease can be worsened due to the hormonal changes of pregnancy. And periodontal treatment during pregnancy is not only safe, it could be life-saving for mother and baby.

How common is periodontal disease and what affect could it have on my baby? Since periodontal disease is the world’s most common, chronic disease and affects more than 85% of the adult U.S. population, the pregnancy concern is significant. Preterm births and low birth-weight babies can be affected by respiratory distress syndrome, mental retardation, cerebral palsy, decreased lung function, anemia, jaundice, intracranial hemorrhage, malnutrition, congestive heart failure, and even death. In Obstetrics and Gynecology, February 2010, Dr. Yipping Han published the first documented case of the still-birth of a full term baby who succumbed as a direct result of the mother’s periodontal bacteria having crossed the placenta.

Greater than 543,000 premature births occur in the United States per year, and the numbers are rising. In Virginia, the overall premature birth rate was 11.4 percent in 2009. Unfortunately, according to the Daily Press, September, 2001, Hampton Roads was cited as “Home of Virginia’s Tiniest Babies.”And according to current estimates, the average hospital bill for a premature infant is $55,242 versus an average of $4,551 for full-term babies. Preterm-related causes of death together accounted for 35% in 2008 of all infant deaths, more than any other single cause.

How bad does my periodontal disease have to be to cause a problem for my baby? In the Journal of Periodontology, 2001, Dr Marjorie Jeffcoat and researchers revealed that women with as little as two sites of periodontal disease may be up to seven times more likely to deliver a preterm, low birth weight baby. As the level of periodontal infection increases, so do the risks to mother and baby, such as gestational diabetes, hypertension and pre-eclampsia in the mother and a myriad of complications of preterm birth in the infant, as noted above.

Infertility in moms-to-be? An Australian study published in 2012 found that women with periodontal disease take an average of two months longer to conceive (seven months) than those without gum problems (five months).

Don’t take unnecessary risks. Periodontal disease is highly contagious and therefore, innocently spread among family members. It does little good for the mom to be periodontally healthy if her kissing partner is not. If untreated, parents can compromise the healthy birth of their baby, and after birth, they can infect their baby’s mouth with the bacteria that cause periodontal disease and tooth decay. Because periodontal disease is such a complex infection, its management requires a multi-faceted approach. There are many steps you can take to avoid gum surgery, loss of teeth and complications in the rest of the body as long as you are under a watchful, professional eye.