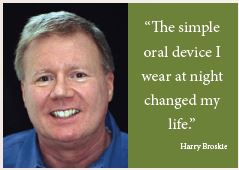 If you’re snoring loudly at night and exhausted during the day, sleep apnea may be to blame. Sleep apnea, episodes when breathing stops during sleep, can wake you and your partner and cause you to fall asleep during the day. But sleep apnea is more than an annoyance – it can be fatal.

“You are literally suffocating in your sleep and have no awareness of it,” says dentist Lisa Marie Samaha, owner of Port Warwick Dental Arts in Newport News, who treats sleep apnea in coordination with a sleep physician. “Although most sleep apnea patients are overweight and older, this condition can afflict young people, thin people and children.”

Symptoms include snoring, and then waking up with a gasp, frequent silences during sleep, falling asleep during the day, and feeling exhausted even after what should have been a full night’s sleep. “Sleep apnea can cause or contribute to high blood pressure, diabetes, depression, heart disease, low libido, erectile dysfunction, short-term memory problems, weight gain, indigestion (gastric reflux or GERD), dry mouth, sore throat, low energy and even auto accidents,” says Samaha.

In collaboration with a Board Certified Sleep Physician, Dr. Samaha and her highly trained team at Port Warwick Dental Arts in Newport News have been helping sleep apnea patients breathe easier for many years. Patients wear a small, custom fitted dental appliance that positions the lower jaw and tongue slightly forward to keep the airway open all night. Samaha is one of the small number of dentists in the United States specially trained to offer this treatment.

“We want to work alongside our patients’ physicians to help add a new, simpler dimension to what is being offered,” Samaha says. “We can help the patients who cannot or will not wear their CPAPs. We are also able to help about 90 percent of snorers stop snoring. There are so many people who want and need this kind of help.” For Harry Broskie of Newport News, seeing Dr. Samaha was dramatically life-changing.

“Dr. Samaha gave me a referral to a sleep center and they told me I had the worst snoring and sleep problems they had ever seen,” Broskie says. “That led me to their CPAP machine and other options, which were cumbersome and caused my sleep to be restless. Dr. Samaha provided me with a custom-fitted oral appliance instead, and my sleep improved considerably. I was able to fall asleep and wake up comfortably eight hours later. Soon, I was no longer exhausted all the time. I felt like I had my life back after many, many years.”

The difference after treatment is dramatic. Medications can often be reduced under the direction of the patient’s physician, depression and other physical complaints often become a thing of the past and patients have an energy level they haven’t known for years, sometimes decades. Spouses sleep more soundly and are no longer worried about their partner or resentful of having their own sleep disturbed. They are happier and quite relieved, too!